On the weekend of 21-22 September 2020, our T-Trak group did the Marine City Heritage Days event in Marine City, Michigan. In the past this has been an Ntrak event for our club, but the location we had set up in in the past was no longer available and T-Trak worked much better in the space that was available.

Dan B, our T-Trak guru, coordinated the layout and supplied all of the modules and the control system used for the event. Dan has been patiently coaxing the club into T-Trak, and this was one of the first club events where we used T-Trak instead of Ntrak.

Not only did the layout run well all weekend, it sold several of us on the merits of T-Trak. Outside of leveling each module, we were up and running much quicker than any of the years we did Ntrak at this event.

Our most recent layout setup was September 16 & 17, 2018, in Marine City, Michigan, during the Heritage Days Festival. We had 16 modules from at least 5 different members.

Our club has changed quite a bit through the years. While we have lost several members to things like retirement, relocation and death, we’ve also picked up new members to replace those who have moved on (voluntarily and not so much).

New members typically operate with us for a show or several, then get the itch to acquire their own module(s). Our members range in age from very young to very old, and lots of our members are somewhere in between.

Modules displayed by our members vary in size and complexity, but we do require members to build their modules to Ntrak specifications, which can be found in the Ntrak manual, published by the Ntrak organization (see http://www.ntrak.org for more information).

Members are expected to make sure their module is operational prior to showing up to a meet.

Above is a 4′ corner built by one of our members for a past Marine City meet. It’s not considered to be complete by its owner, who still isn’t sure what he wants to so with it. 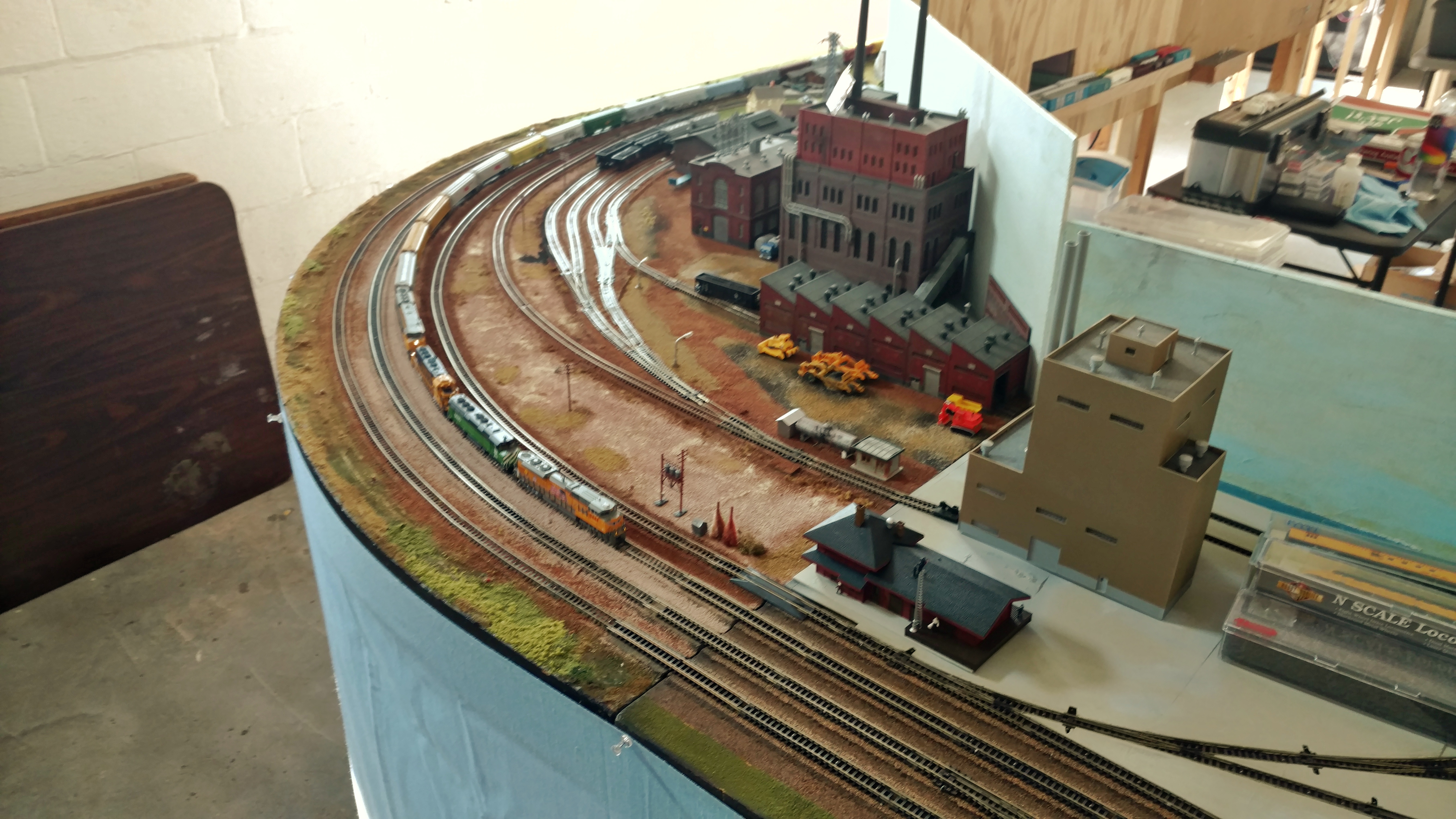 One of our members takes great joy in the reliable operation of a unit covered hopper train. In this image, that train is stretched across a four unit set of modules that includes a coal mine, power plant, asphalt plant and shopping center. An isolated siding stretches the length of the four modules as well, which comes in handy with multiple operators on the layout.

This past weekend was a first for our group. It was the first of (we hope) many layout setups at the Marine City Heritage Days Festival, an event held to raise awareness and money to restore the old city hall in downtown Marine City. Although we did set up at this event last year, this was the first year we were in the building’s garage, which was much less cramped than the interior room we occupied last year. Coincidentally, it was much easier to set up and take down the layout in the garage than in the space we occupied last year.

Unfortunately, we were too busy having fun and running trains this year to get many photos, but here are a couple shots one of our members snapped during the days’ runs.

A partial overview of the layout. Our duck under bridge module was located along the long edge of the layout, allowing for semi-camouflaged entry/exit from the center area. With 2 4′ corners on this side and 10′ of modules in between, we were able to fit in one member’s four unit set of 4′ modules with a pair of 3′ corners that have seen better days. We hope to move to all 4′ corners in the near future in our setups.

At this angle, it’s difficult to see the bridge module lacks legs! In this shot, a rather long unit train of covered hoppers traverses the bridge module and several other modules as it makes its way around the layout.

Bluewater International Ntrak meets the 3rd Tuesday, between 6:00 pm and 7:45pm, at the Marysville Public Library, in Marysville, MI.

Until the library meeting rooms are reopened, we are meeting in the pavilion closest to the steam engine display in the Marysville City Park, weather permitting.